The Grotesques of the Luttrell Psalter

The Luttrell Psalter is a book that was commissioned by Sir Geoffrey Luttrell in the 14th century. It is best known for its outstanding marginalia, which combines religious events and iconography with scenes of everyday life in medieval times.

Apparently they had squirrels as pets back then, which is a bit awesome. 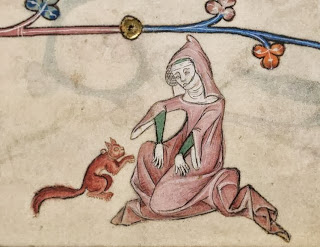 There is only one copy of this text in existence, however the British Library recently digitised the manuscript, and you can check it out here. So you can look at this priceless artifact without leaving your couch. Pretty cool.

The online viewer reveals that the ancient pages have retained much of their original colour, as the imagery is bright and clear throughout.


As the British Library explains, Psalters are religious texts:


The Psalms are 150 ancient songs, grouped together to form one of the Old Testament books of the Bible. In the Middle Ages (and down to the present day) they formed a fundamental part of Christian and Jewish worship, for ecclesiastics and lay-people alike; many people learnt to read by being taught the Psalms. The Psalms were often written out separately from the rest of the Bible, preceded by a calendar of the Church’s feast-days, and followed by various types of prayers. Such a volume is known as a Psalter.

Accordingly, the Luttrell Psalter contains many biblical scenes depicting the adventures of saints and angels, and includes the story of Jesus himself (click to enlarge all pictures). 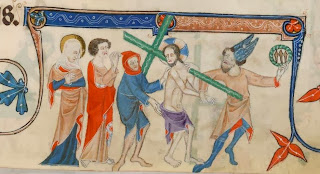 Due to my limited religious knowledge, I can't identify precisely what is going on in many places, although some events are rather disturbing.

E.g. is this a zombie execution?

This naked man appears to be stuck on a cactus. Not that he is getting any sympathy. 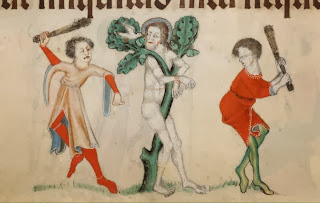 Who or what is this sinister hooded figure? 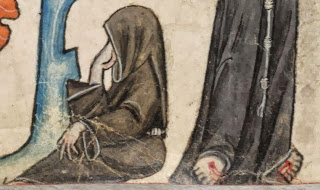 Why is this two-faced werewolf being told off? 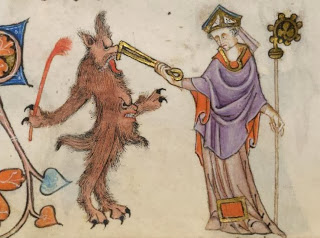 I don't remember any of this happening in the Bible. 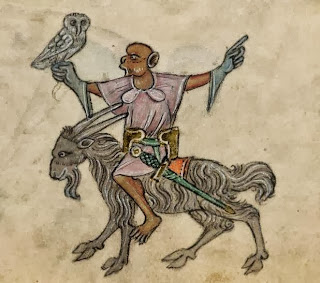 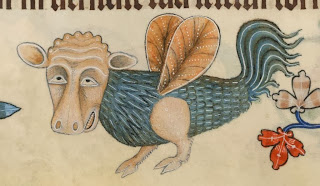 At this point it's probably obvious that the Luttrell Psalter is much more than 'just' a book of Psalms. As well as many scenes of rural life in the 1300s, it is packed with rude and beautiful medieval grotesques. 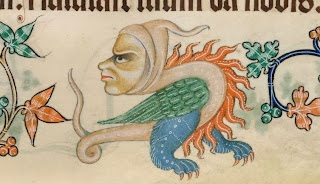 A number of anonymous artists participated in illustrating this text, but it seems one very imaginative person in particular may have been responsible for the creatures. The British Library again:


The finest decoration is in the central section of the manuscript, painted by the most gifted of the artists. His pictures display acute observation and attention to detail - he even tidied up some of the other painters' work. His clear talent for inventiveness and gentle humour is expressed in the so-called 'grotesques': hybrid monstrosities that may combine a human head, an animal/fish/bird body, and a plant tail. The animals have attracted the interest of scholars and public alike. Many of these must have been products of the artist's imagination, and seem unrelated to the text they accompany.

And there are so many. Big ones. Small ones. Ones with bird hats. 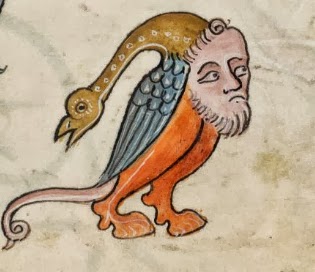 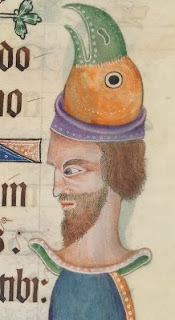 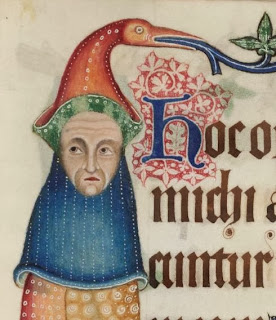 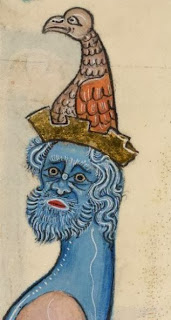 Or birds with hats on...

That guy above seems to be wearing the medieval version of a fedora.

I can't emphasise enough: if you are a fan of grotesquerie, surreal art, animals, or weirdly wonderful things in general, you need to check out the Luttrell Psalter. 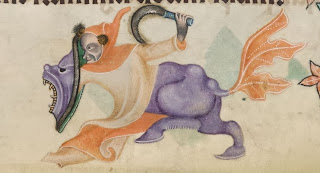 It's really difficult to try and pick my favourites, but here are a few more amazing ones (there are many others): 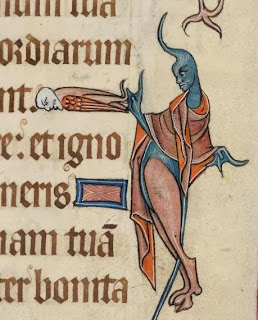 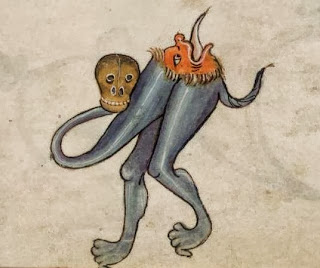 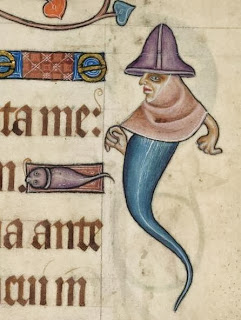 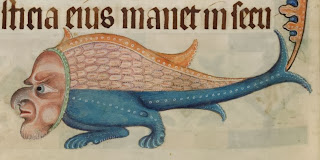 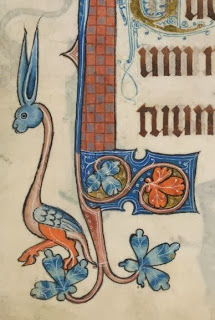 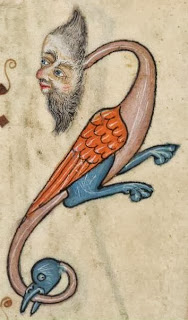 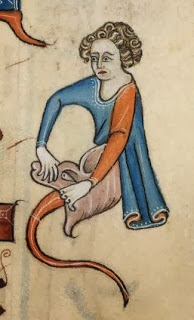 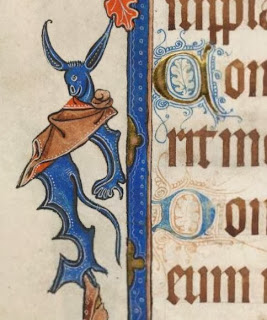 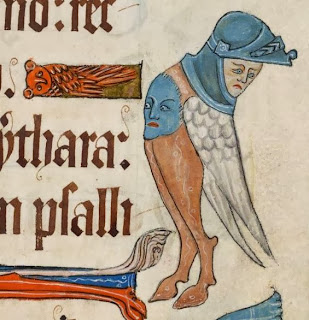 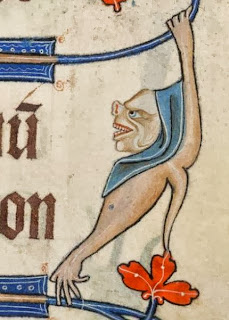 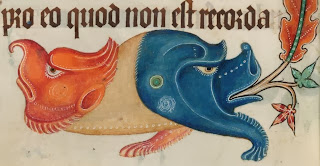 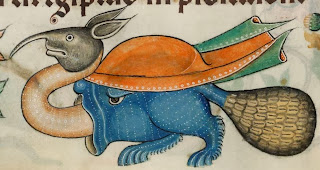 For first-time users of the BL digital archive, please note - to access the Luttrell Psalter, first go here, then scroll down and click 'View: bindings': 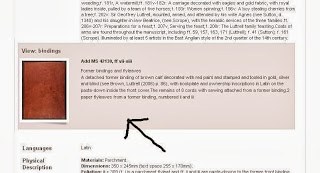 Then you can use the buttons on the upper right to turn the pages and explore the book.

To find specific pages, use the drop down menu on the furthest right. You can see the reference number for each page - e.g. f. 56r - and you can chase up all the grotesques I've posted here that way as well.

(Adding these instructions because it took me a little while to work it out the first time. Not the sharpest tool in the shed.) 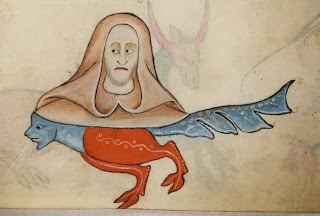 Right, I think that's enough gushing from me. If you're interested in these kinds of texts and images, I would encourage you to follow the British Library's medieval manuscripts people on Twitter. Click the 'traditional grotesque' keyword tag below if you want to read other posts about these kinds of beasties.

Gwyneth
Perth, Australia
Recently completed a PhD on the grotesque. I enjoy long walks in cyberspace and colourful pants.

This work is licensed under a Creative Commons Attribution-Noncommercial-No Derivative Works 2.5 Australia License.